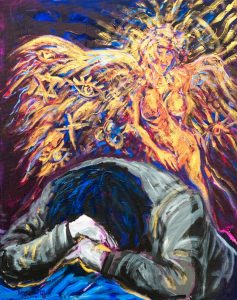 Artists, faith leaders, mental health advocates and more are joining forces to help de-stigmatize the way we discuss – and help – those who suffer from mental illness. In search of the light is a series of panel discussions, an art exhibition and performances taking place through May 31 at Galerie Camille in Midtown Detroit and surrounding areas.

At the heart of the series is the work of Michael Francis Miller, painter, poet and founding member of Detroit’s beloved country-punk band. Goober and the peas. Miller died of suicide in 2001, after years of courageously battling deep depression and schizophrenia. Miller’s brother and bandmate, Dan John Miller, recently rediscovered the incredible paintings his brother made in the 1980s and 1990s as his family cleaned out the contents of their mother’s basement.

“I felt the need to honor my brother’s creative spirit,” says Miller. “He was a wonderful spirit, who always pushed and inspired me to do more [creative work].”

Inspired by the renewed discovery, Miller was determined to share his brother’s memory and talent with the world.

“One of the things that was difficult [about the aftermath of his death] was trying to make something positive out of something that was so sad, that just left us in such a hole.

With the help of friends, the event grew from a gallery exhibit of Miller’s work to a nearly month-long series of performances, talks and healing for those who have lost loved ones to of mental illness. With the addition of Rabbi Danny Syme, former Chief Rabbi of Bloomfield Hills Beth El Temple and a leading local crusader in the fight against suicide, Looking for the Light aims to de-stigmatize the conversation around mental health struggles.

Rabbi Syme lost his brother, also named Michael, to suicide in 1975. “I felt pain and guilt…and since that time I have spent much of my life working in prevention suicide among young people. »

If you or someone close to you is struggling with suicidal thoughts, please call 1-800-273-8255 or visit Suicide Prevention Lifeline.

Listen: ‘Looking for the Light’ organizers Dan John Miller and Rabbi Danny Syme honor the lives of their loved ones.

Reliable, accurate, up to date.

WDET strives to make our journalism accessible to everyone. As a public media institution, we maintain our journalistic integrity through the independent support of readers like you. If you value WDET as a source of news, music, and conversation, please donate today.

Understanding the links between mental health issues and substance use disorders