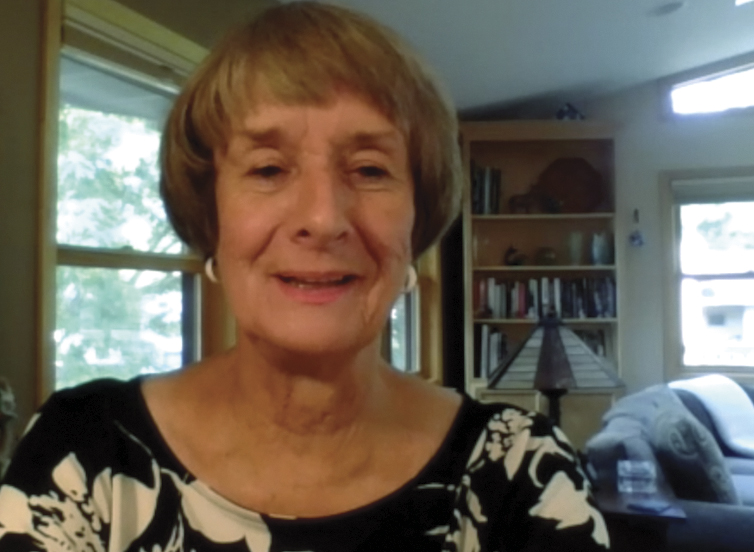 This ongoing series of conversations with Minnesota women about their political engagement was created in collaboration between Amra Avdic, journalist and project director of the Bosnian Contemporary Women’s Festival, and Minnesota Women’s Press, with support from the Global Community Solutions Program in the fall of 2021.

Amra interviewed Minnesota women engaged in politics to share conversations with her television audience in Bosnia about how to engage and support female candidates and voters in what has been perceived as a patriarchal society.

Can you tell me how your story began, which led you to become a politician in the Minnesota House of Representatives?

I joined a group called the League of Women Voters in the United States. It started after women got the right to vote with the 19th Amendment. They wanted to educate women on the issues. So I joined this group here in my area and got interested in attending political meetings, school board, city council, state legislature and then I got recruited by a friend of mine from the League of Women Voters who was at the local school. plank. I did that for a few terms. Then I was drafted into the state legislature. When I joined, I was always careful to recruit other women, knowing that men often run for political positions and that women are more reluctant. I would never have entered politics without the League of Women Voters and Strong Women who pushed me forward. I try to do it for other women too.

Women don’t like to do things on their own. They need a lot of people to support them and a lot of help. So I gave this advice to the men and women I recruited, but it was the women who often did it. Don’t decide to run before you have your aids. You need a treasurer or someone to collect the money and put it in the bank and prepare the thanks. You need a volunteer coordinator who will recruit people to go door to door with you and help you. You need someone to lead your social networks. I tell women to do this. They feel comforted and empowered, and that they are not alone in the race, as races can be tough, especially these days with all the negative campaigning.

Usually I see women who are always wondering if they are ready for politics. Are we already ready or should we be bold and try even if we think we haven’t prepared everything?

Jump in. Because we are never ready. You’re right. We always learn if we are lucky; we learn throughout life, I always read books and listen to documentaries, or podcasts and such. We never stop learning. The best place to learn is to be elected. So when you’re on the school board, you can talk to the school superintendent every day if you want. If there’s a problem with how to handle the buses, and how to get the kids to and from school, or what’s the best program for reading or math, you have people to ask in your school district. I come from the League of Women Voters, as I said, where we studied the issues to death, because we just thought we always needed to know more. But yet, when I ran for the legislature, everyone said, Forget the problems, you know, go for it.

In my country, it’s so discouraging that even women don’t want to vote for a woman because on the pretext that men are older in politics, they know better, etc, etc. But how do you change deeply rooted mindsets? What can we do to change these things?

I think success breeds success. Those of us who support more women in power must continue to do so and put them forward. They just have to be encouraged and bold, like you said, to put their hats in the ring and run, and then they’ll win. It’s when they don’t show up that we don’t have the number of women in power that we should have; the higher you go up the food chain, the more criticism there is. We think governors and presidents and people in high positions have to be really strong and it’s really good to have a male voice and a strong man or something like that. So those are the places where it’s even harder to get women to show up or succeed. We know that women study and work hard, and on the whole, you know, they do very well. So I think more models.

What are you still working to achieve through political play engagement? How hard was it to fully expose your throat? How did you manage your private but also public situation at the same time?

It was a luxury for me to be a legislator when Jim got sick. He was 21 and I had been an MP for six years. I was already a public figure, our children and my husband. It was a natural progression, then when Jim got sick, for me to continue talking about our family. When newspapers, television and radio find out that a legislator has a personal story, it’s a good story for them; they might not cover the issue at all, especially something like mental illness when Jim fell ill in 1999. When it’s a public elected official, then you have an opportunity and an obligation to share. Even if it was very hard, because you are in personal distress, it was still a luxury. Whenever our family was in trouble, like the hospital wouldn’t talk to us because they didn’t ask him for medical clearance for information, or the police wouldn’t take him to the hospital, even though he was very sick and out of control, I could make a big deal. They didn’t want to be the ones not taking proper care of Representative Greiling’s son. It gave me power and I felt I had to use it for other people.

The first law I ever passed was the first problem we ran into; they wouldn’t talk to me because Jim hadn’t signed an information release. In truth, they hadn’t asked him to sign one. They didn’t think it was their job to ask him because he was in a state of distress and psychosis when he went to the hospital, but they didn’t ask him and they didn’t tell me. . I have looked into the matter with the lawyers for the legislature. We just drafted a simple bill that says hospitals have to explain to families the need to sign waivers. I thought it was just common sense. This is often what politics is, there is only common sense written on it that people don’t use their common sense to. So all things like that. It also made me feel better.

I have to know after 20 years of legislature, what are the results of which you are most proud?

I would have been especially proud of this massive education funding reform that I developed working with every education group in the state and they all ended up going along with it. We have different areas of the state that need different types of funding, and they always fought against each other, but then we had this plan that would have been fair to everyone. That would have been my crowning achievement. We ultimately failed to adopt it. We passed it in the House of Representatives where I served, and I think the governor would have signed it. But the Rural Democrats in the Senate, actually my own party, killed it, because they were afraid they would do better under the old system, where they had been able to defend some special things in the government funding bill. ‘education. So it didn’t end up happening. It was my biggest regret.

What I’m most proud of is my mental health legislation. We ended up with a huge, better-funded mental health system, a much more robust amount of services, and we made a lot of policy improvements. I think that’s what I’m most remembered for, even though I spent most of my time working on education.

How does everyday life, being a wife, sister, mother, daughter, play an important role in political action? How do you see this?

Well, I think women are great at multitasking. So I think it’s a natural thing. We can integrate everything. I just think it makes all the relationships in your life better. You don’t have that much time, but my family has always been proud of me. Our daughter, like you, is a journalist, and she was interested in public policy, but was smart enough not to get involved herself. She works for POLITICO, if you know that organization.

Jim, our son, helped me write the book. Many parents I know would love to write about their children with schizophrenia or some kind of mental illness, but the family member doesn’t want to. They have become accustomed to this culture of silence, that it is a shameful thing. It only adds to your sadness and grief. So everyone benefits when you speak in public and I always speak in public, I helped my family and helped me write the book can help my son participate.

Drug-related deaths: 1,286 people died from accidental overdoses in Minnesota in 2021, an increase of 22% from 2020. Most of them are linked to fentanyl. Minnesota Health Commissioner Jan Malcolm said. “An important step is to expand programs that make it easier for people to access naloxone – a drug that can reverse overdoses and save lives.”