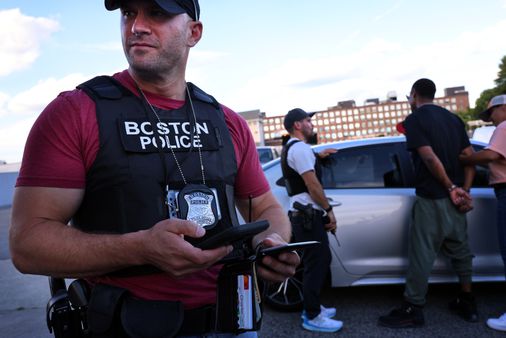 Linsky, 40, is part of the Boston Police Department’s Street Outreach Unit, a specialized team whose officers are dedicated to connecting people with substance use disorders and mental illnesses to social services, focusing less on incarceration than on treatment and housing. A former mental health worker who felt called to join the police after helping officers respond to psychiatric emergencies, Linsky brings years of training and crisis intervention experience that define his policing philosophy.

“These are always things that are close to my heart: advising and talking to people, listening to their stories and wanting to be useful… [and] those skills never really leave you,” he explained. “This unit in itself is a testament to our commitment to recognizing that addiction, mental health and homelessness are all part of policing now.”

For Boston City Councilman Frank Baker, Linsky is “the cop of the future”, someone trained to recognize emotional distress behaviors and defuse emotional situations “without escalating them”.

Baker said his family’s history of heroin addiction made him an avid street outreach advocate, and when introduced to Linsky through street outreach chief Lt. Peter Messina, Baker immediately recognized him as a “model of true police reform and community policing”.

Linsky grew up in a middle-class suburban home in Milford, her mother was a nurse and her father a teacher. Coming out of Penn State University with a degree in psychology, he just knew he loved people and wanted to help them. He also loved nature, and a few stints in inpatient treatment centers for troubled youth led him to become a wilderness therapy instructor in New Hampshire, “taking groups of at-risk children out into the woods and teaching survival skills,” he said.

For several years, Linsky traveled the country doing similar work, going as far as San Diego before returning home to earn his mental health counseling degree at the University of Massachusetts Boston. There he interned and then worked for the Boston Emergency Services team, eventually becoming the first clinician in the program to partner with police officers to respond to mental health emergencies. The co-response program is now a citywide public health initiative, but when the program began in 2011, Linsky said many officers were skeptical.

“There was some trust that needed to be established on both sides,” he said. “Early on, people were trying to figure out, ‘Well, what is this guy, why do we need him? What can he do for us that we aren’t we already doing?”

But over the next decade, the department made “light years” of progress, he noted. In addition to the co-responder program, the department now also has its own crisis intervention training for officers, which Linsky helped develop and co-teach.

“When we started I was a guy trying to figure it out,” he said. “Ten years later, Boston has really embraced the holistic mental health/substance use component of what policing is.”

As the department realized the importance of mental health training, Linsky fell in love with the camaraderie and challenges of policing.

“Everyone around me was like, ‘Dude, just be a cop. You can theoretically do the same [you do now],’ “ he said. “The more people said that to me, the more I thought, it was starting to make sense.”

Kate Moore, director of emergency services at the North Suffolk Mental Health Association, shared an office with Linsky nearly a decade ago – when the two were still working in outreach – and said she “always knew he could do either, or both, and that’s what makes him a good officer.”

Moore now works with officers in North Suffolk County and said many of them reminded her of Linsky.

“They follow the laws they need, but they also understand that there’s more to a person than the crime or the situation they’re in,” she said.

Although a latecomer to the police academy at age 35, Linsky excelled there, winning a physical fitness award that allowed him to choose his first posting. He chose B-2 in Roxbury, one of the city’s busiest areas, and found that despite his desire to be “just a cop for a while”, his crisis intervention training conditioned his response to every emergency call, from horrific crimes to minor misdemeanors. .

“Recognizing that even just being stopped at a traffic stop for some people is an incredibly anxiety-inducing event, one of the things we can do is make people feel comfortable at that time” , did he declare. “It may sound really stupid, but I used to start with a joke when I was arresting people…because I can be aware of my surroundings, be tactically savvy and also do kind of a quirky commentary on their sandwich to establish some sense of humanity.

After about four years at Roxbury, Linsky transferred to the streets. At first, he had typical outreach responsibilities, such as distributing clean needles or trying to connect people to drug rehabilitation programs. Faces that once seemed fleeting became familiar, and he learned to recognize many people who frequented Mass. and Cass for years.

“You get to know them a bit personally, you get to know some of their family members who are looking for them, but people don’t burn a bridge to end up there. You burn all your bridges,” he said. “It’s the last stop of the train; it doesn’t get any worse than that. Either people heal from here or they die.

The occasional silver linings keep it going. He remembers reuniting a woman with her sister after months of separation, sitting in the rain and hearing her story for the first time: addicted to opioids on and off for years, children taken away by protective services, good men and men bad who passed out and out of his life.

He called his sister, who said she would come right away. But the woman was hesitant, he recalls, her face filled with the apprehension of someone “so physically addicted” that she couldn’t imagine leaving the opioids behind.

“‘Just go kiss your sister, and whatever happens after that, that’s what happens,'” he told her. From afar, he watched them kiss before the sister’s husband rushed them into the car and drove off into the gloom. “I remember thinking, ‘God, this place is so hopeless, but I finally feel like I’ve done something right today.’ ”

Linsky’s work in the Street Outreach Unit now focuses on sex trafficking, intercepting pimp and trafficker rings while guiding women to recovery centers. Although he considers the community relationships he has developed to be one of the most meaningful parts of his job, Linsky said he prefers large-scale projects because of the opportunity they provide to interrupt the system, instead of putting a band-aid on a bullet. size problem.

“We’re not short on resources,” he said, but the pull of addiction is overwhelming. “It’s so hard to get people to make a good choice.”

Do you take mental health lightly? Then these 7 diseases will happen for sure, protect them like this