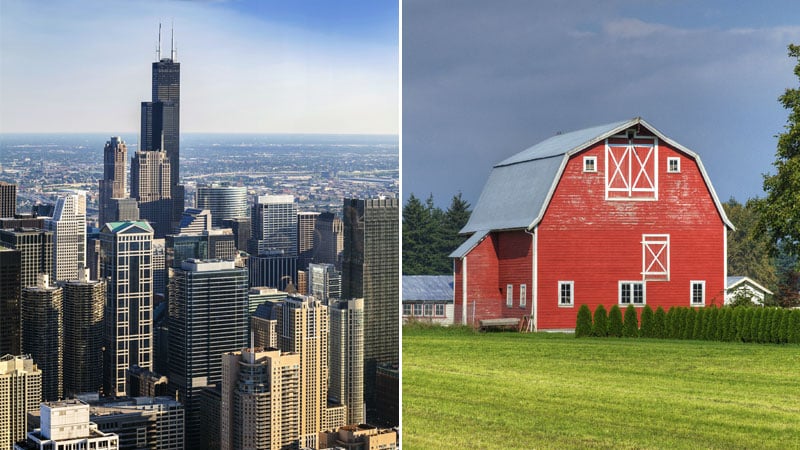 Life in the city or in the country? The genetic risk of mental illness can decide

A high genetic risk for a range of psychiatric illnesses appears to influence individuals’ choice of urban or rural life, new research suggests.

People with a genetic predisposition to schizophrenia, bipolar disorder (TB), autism spectrum disorder (ASD) or anorexia nervosa (AN) are significantly more likely to move from a rural to an urban setting, while those with a high genetic risk for attention deficit hyperactivity disorder (ADHD) were more likely to do the opposite.

The results held up even in people at high genetic risk who had never been diagnosed with a psychiatric disorder, highlighting a genetic factor that previous research linking city life to mental illness has not explored.

The study was published online on October 27 in JAMA Psychiatry.

The results of the study do not exclude the influence of the environment, but offer evidence that the migration pattern that researchers have followed for years may have a multifactorial explanation.

“Our research shows that at some level, an individual’s genes select their environment and that the relationship between environmental and genetic influences on mental health is interrelated,” said Jessye Maxwell, MSc, senior author and doctoral student in psychiatry at King’s College, in a statement. “This overlap should be taken into account when developing models to predict the risk of people developing mental health problems in the future.”

For the study, researchers calculated polygenic risk scores (PRS) of different psychiatric illnesses for 385,793 UK Biobank participants aged 37 to 73. PRS analyzes genetic information across a person’s entire genome, rather than through individual genes.

They used address history and UK census records from 1931 to 2011 to map population density over time.

When they compared those born and stayed in rural or suburban areas to their counterparts who moved from those areas to cities, they found that the odds of moving to urban areas varied by 5% among people. at high genetic risk of schizophrenia in 13% of those at high risk of TB. Only people at high risk for ADHD were more likely to move to rural areas.

However, the study is not without limits. Only people of European descent were included, family medical history was not available for some participants, and only around 50,000 people were diagnosed with mental illness in their lifetime, which is not representative. of the general population.

Yet the research adds another piece to the puzzle that scientists seek to solve about where people live and the risk of mental illness, Jordan DeVylder, PhD, associate professor of social work at Fordham University, told New York, who commented on the study for Medscape Medical News.

DeVylder, who also published research on the subject but was not a part of the current study, noted that city life has long been considered one of the most consistent environmental risk factors for psychosis. However, he noted, “this association can also be explained by genetic selection, in which the same genes that predispose to schizophrenia also predispose to choosing city life.”

“This study presents the most convincing evidence to date that genetics have a major role in this association, at least in countries where this association between urban living and psychosis exists,” he said.

The study was funded by the National Institute for Health Research, the South London Biomedical Research Center, the Maudsley National Health Service Foundation Trust and King’s College London. The authors and DeVylder have not disclosed any relevant financial relationship.

As the holidays approach, Massachusetts faces a mental health crisis

There is a blind spot in young adult mental health