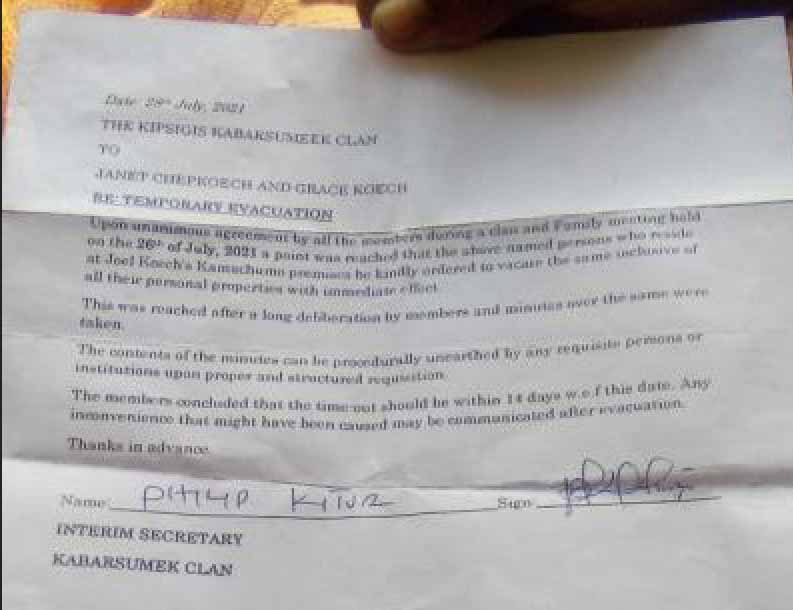 A clan in Bureti constituency wants to deport a woman, blaming her for her husband’s mental illness.

On July 28, members of the Kabarsumeek clan banished Janet Chepkoech, 38, for allegedly playing a role in her husband’s mental illness.

The clan, through its acting secretary Philip Kitur, gave Chepkoech 14 days to leave the village. She was also ordered to leave behind the property belonging to her husband, Joel Koech.

“Any inconvenience caused will be communicated after the evacuation,” part of the letter read.

The letter was copied to his mother Grace Koech, elder of Kamachumo village, deputy chief of Nganaset and chief of Kapkatet.

Chepkoech has not yet left the village as instructed by the clan.

She accuses members of the clan, her stepson and a bishop of orchestrating the eviction in an attempt to deny her access to her husband’s property, including a four-acre plot of land.

â€œSince June, when my husband fell ill, I have not known peace. The clan members started pointing an accusing finger at me, â€she said.

Her husband, Koech, was then admitted to the Kapkatet Sub-County Hospital.

â€œFrom then on, my husband’s clan members started to distrust me. They did not allow him to come back to me after he was released from the hospital. Instead, they took him to the village of Itoik, where he lived with his deceased wife and children, â€she said.

Chepkoech said she got married to Koech in 2009 after the death of his first wife. â€œWe have two teenagers. ”

The clan’s decision sparked outrage from human rights defenders in the county.

Kapkatet chief Daniel Koskei said he knew the deported woman was indeed married to the man who is said to be suffering from mental illness. “Chepkoech and Koech have been married for 11 years.”

Farida Chepkemoi, a lawyer affiliated with the Federation of Women Lawyers (Fida), called the clan’s letter illegal and scandalous.

â€œClan members have no right to issue a 14-day ultimatum to Chepkoech to leave her marital home. Her husband and her family members did not pursue her. Where does the audacity of the clan come from? she posed.

Chepkoech is also treating injuries after she was allegedly assaulted by a clan member and her stepson for resisting attempts by a local bishop to plant corn on their land.

“We will make sure that no one drives Chepkoech out of her home,” Chepkemoi said and called on the police to follow up on the assault report filed by Chepkoech at the Kapkatet police station.

â€œI tried to block a tractor they had brought in to plow part of my land. They tore my clothes and I had to flee naked, â€she said.

â€œAll the while the bishop was there. He said he had rented the land from my husband but I was not aware of the lease, â€she added.

Did you know Jungkook once had a “mental breakdown” and almost quit BTS?