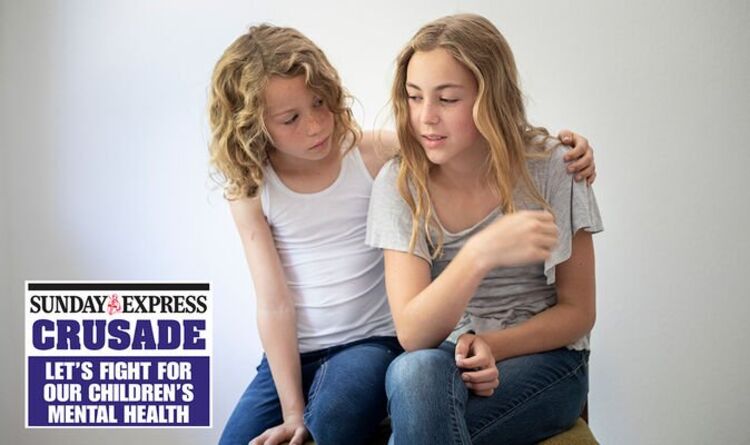 The NHS is now dealing with the highest number of young people in crisis and referred for help since the current registrations began in 2018. There has been a 152% increase in referrals since then, including those who are mutilated. Charities and support organizations are also overwhelmed with calls for help.

In November last year, according to the latest figures available, almost half a million children under the age of 18 attended a mental health appointment or were seen by mental health services in the NHS, which gives a rate of 665 per hour.

The shock statistics also reveal a rise in the number of children under 16 being forced to stay in adult mental health services and hospitals away from their homes and families, which experts say shows the system is at breaking point.

“The sharp increase in the number of young people in need of urgent mental health support since the pandemic hit, together with the record number of children staying in adult services, shows us how much the goals have changed in youth mental health,” said Campaigns Director Tom Madders. and communications at YoungMinds, which analyzed the latest statistics. “Even before the pandemic, many young people struggled to access support from mental health services.

“But these services are now facing unprecedented demand and the reality is that too many young people and families simply cannot get the help they need.”

Frontline child and adolescent mental health services (CAMHS) have faced funding cuts that represent a 23.5% drop in spending per person between 2014-15 and 2020-21, said the Local Government Association.

Chronic underfunding has decimated children’s services and experts warn staff are working under intense pressure to cope with a growing workload.

Around 38% of children have to wait longer than the NHS target of 18 weeks to get an assessment (Photo: Richard Clark/Getty)

The current lack of resources devoted to young people’s mental health is underscored by a litany of damning statistics: around 38% of children have to wait longer than the NHS target of 18 weeks to get their first assessment. Some 15% of CAMHS consultant psychiatrist positions are now vacant.

The placement of children in hospital wards more than 30 miles from home rose 14% year-on-year last November to a record 288 children under 18, despite a pledge to end this practice by last April.

Mental health hospital beds – adults and children – have been reduced by 25% over the past 10 years. Dr Elaine

Lockhart, chair of the Royal College of Psychiatrists’ Faculty of Children and Young People, said: “Children and young people have faced unprecedented mental health challenges during the pandemic.

“Those who need to be admitted to an inpatient unit will suffer even more when no beds are available locally and they have to receive care away from home.

“Being removed from family and friends and the local services they are used to engaging with can increase the time patients spend in hospital and have long-term implications for their recovery.

“Although the government has pledged to reduce the number of out-of-zone placements for children and young people, too many people still face this reality.

“Truly eliminating this unacceptable practice requires targeted investment in services and the workforce to ensure that children receive the help they need, when they need it and where they need it.”

The Department of Health and Social Care says the NHS long-term plan provides an extra £2.3billion a year to expand mental health services, providing help for an additional 345,000 children and young people by 2023-2024. However, campaigners say the problems have worsened since the plan was drawn up.

The Sunday Express is campaigning to ensure all vulnerable young people are urgently treated and is calling for early support centers in every community to improve the speed and availability of treatment.

Tom Madders added: “The evidence is clear that a greater range of mental health support for young people needs to be available.

“The government must urgently equip the NHS to deal with the immediate pressures facing the services, but must also ensure that its new mental health plan really focuses on young people and sets clear targets, at the across government to deal with this crisis.

“Young people need help early on, close to home, when they first experience poor mental health, which is why we are calling for a national network of early support centers be deployed as soon as possible.”

Alarming increase in vulnerable children severely affected by the pandemic

Data analyzed by the Nuffield Trust and Health Foundation showed an 81% increase in referrals to children’s mental health services between April and September 2021, with more than 15,000 crisis referrals over the same period. This is a 59% jump from 2019 and a fourfold increase in the number of under-19s awaiting treatment for eating disorders.

Separate research shows that one in six children in England had a probable mental disorder.

Report author Jessica Morris said: “There has been an increase in cases of eating disorders, and children with these conditions are deteriorating as more children and young people attend A&E services.

Children should be happy to get the most out of school, says Tim Loughton

When I was first elected to Parliament in 1997, mental health was still largely a taboo subject. It was little understood and even diagnosed it was not something to admit, for fear of attracting derision rather than empathy.

But in 25 years things have come a long way. Recently in Parliament we had two full debates on children’s mental health.

MPs speak openly about their own struggles with mental illness as the NHS strives to achieve esteem parity with physical conditions.

And mainstream media such as the Sunday Express are running welcome campaigns urging the NHS to go further. So far, so good.

The problem is that the problem has gotten worse. The mental health of young people has been particularly challenged by the pandemic and the impact of confinement.

The demand exceeds the supply of support and treatment. The government has announced substantial additional investment and new initiatives in schools, but mental health professionals are in short supply and treatment thresholds remain too high. Too few young people are seen in a timely manner, which risks spiraling into more serious and costly mental illnesses.

Young people’s mental health has been challenged by the pandemic (Photo: Robert Daly/Getty)

School closures during the darkest days of lockdown proved disastrous. While much is being done to organize remedial education, we must mobilize all resources to address the mental health deficit currently affecting one in six students.

Children need to be happy and settled to learn and get the most out of school, preparing them for further education, careers and adulthood.

But there is a longer-term problem that predates the pandemic and where the government’s Best Start for Life initiative marks a significant shift from firefighting symptoms to tackling root causes early.

A child’s brain grows exponentially in the first 1,001 days of life. Ensuring that a baby is well nourished and strongly attached to loving parents or caregivers at this stage can determine the outcomes of that child’s life.

It’s not rocket science that we need to do much more to ensure we have happy parents and babies early on, to help prevent mental health consequences later.

The government’s upgrading agenda is rightly about investing in infrastructure and skills to give everyone a fair chance across the UK.

Surely this should start with a “upgrading” program for children’s mental health that invests in happy children making well-rounded students and successful adults, wherever they are born.

Tim Loughton is the former minister for children

What’s going on where you live? Find out by adding your postal code or visit InYourArea